I met my husband at the Welsh Agricultural College in Aberystwyth. After our marriage in 1991, we took the tenancy of a small hill farm in the Yorkshire Dales.

Richard kept working as a Farm sales rep, as well as looking after our few cows and a small flock of Lleyn sheep and I started breeding Angora rabbits.I joined a cooperative of British Angora producers and opened a craft shop selling yarn and Angora products.I then proceeded to have children!

After child number 4 we were given the opportunity to move to a much bigger farm.This we did but, with some regret I had to close the shop and spend my time with children rather than rabbits.

By 2007 the Children were growing up and I had a weekend away visiting Woolfest in Cumbria.  This inspired me to repackage my stock of Angora from the attic and apply for a stand at Wonderwool to be held at Builth Wells in April 2008. Whilst there I was overwhelmed by the positive response and within days of coming home, more bunnies had been bought and Bigwigs was re-born. However, it took until 2011 to build up the herd & have enough fibre to spin and to start selling online and at the wool fairs that were continuing to spread around the country with the growing interest in natural fibres and creativity.

Over recent years the herd has suffered with outbreaks of RVHD, now prevalent in the wild rabbit population. To add to my dwindling gene pool, in 2019 I travelled to France to meet the president of the French Angora club and came home with some new bunnies to introduce to my Continental breeding stock.  I now have around 50 French and French/Continental rabbits producing luxurious, silky soft angora.

When I’m not enjoying my rabbits, I work for a friend who has walking holiday company, manage and clean a holiday cottage and when time allows, look after my grandchildren, and occasionally clean my own house!  If there were a few more hours in the day (and the sun was shining!) I would probably spend more time in the garden or going for longer walks with my working cocker spaniel, Mabel.  There is never a dull moment here at Carr Farm. 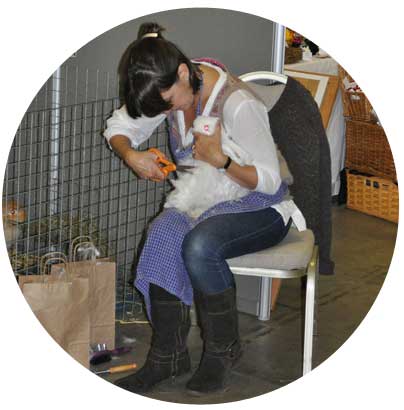